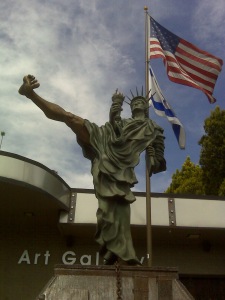 As a kid, I remember experimenting for the first time with the chemical reaction between baking soda and vinegar.  Even though it was “educational” the authorization to play with an “explosive” combination was liberating.  I can still recall the sweet anticipation as we poured the baking soda into the make shift volcano my brother and I slapped together.  Amazingly that miniature explosion of foam and gas did not disappoint.  Now, picture that reaction for a minute and I want you to substitute politicians promises or rhetoric for vinegar and America’s ideals and frustrations for the baking soda and you have a recipe for another volatile  reaction. This is why most people advise you to avoid discussing politics in friendly environments and It’s really not bad council.  However, back in 2005 I not only decided to ignore this bit of wisdom, but I found myself plunging into the vinegar of politics and challenging the American people to mix in as much baking soda as they could. Amazingly, this dramatic change of my life’s course happened nearly as fast as the reaction just mentioned, but I hadn’t anticipated it at all.

The incidents and emotions of the two days that dramatically altered my career and life are still vivid today.  While commuting home one September evening in 2004, I turned on the radio as usual to catch the news.  An interview with a school teacher had just begun and as I listened I suddenly became very aware that my blood pressure was sky rocketing. I was appalled and angered by the fact that court decisions and politics were dramatically effecting the type of education our children were receiving.  I recall still being very upset the next day as I asked myself over and over again, “Why is this happening?”  Simply put, I couldn’t brush this crossroad aside.  Instead, I forced myself to consciously choose between apathy and ignorance or action and education. Sitting alone in my office late that next night, though I didn’t know what to do, a picture of my children on my desk convinced me that my ignorance must end. Now I’d been frustrated about government before but this time there was a catalyst present. If we step back to the baking soda experiment and add warm water it becomes a catalyst that speeds the reaction and provides a more dramatic result. Sitting in my office alone that night something bigger than me stirred my heart and urged me on. There was a catalyst present, a type of inexplicable inspiration from God that assured me I must try.

With in one year of that pivotal moment, I was walking the streets of America encouraging involvement in the political process as a representative for a non-partisan, non-lobbying legislative research firm, called NWYC.  Their goal is to educate the people and put the power and responsibility of Government back in our hands. This certainly appealed to me, but I was in for a surprise when I realized how many Americans (including myself at the time) though extremely frustrated did not know how to preserve our freedoms and liberty. To date I have literally conducted thousands of one on one interviews in 8 different states with business owners, professional people, managers and citizens in general. I ask questions in an unbiased fashion about current critical issues in Congress and record the responses in a format that becomes a direct communication between them and their lawmakers in Washington. I have had the privilege of meeting with the back bone of America, hearing the legitimate complaints of the over-regulated small business person, the worried family members of our dedicated servicemen, the frustrated teacher, the concerned pastor and many, many more! While opinions on solutions invariably differ there is one common theme I hear– they all want freedom and opportunity.

If we all generally want the same thing, why then as a nation do we feel so far from it? The simple answer—ignorance and failure to act. As a child we feared what we didn’t know was in the closet. It wasn’t until we had a grasp on the concrete nature of things that we realized the closet contains stuff, not monsters and bad guys. Our freedoms and liberties will similarly seem in peril as long as we feel as helpless as the child did about the unknown in the closet and its true nature.  While listening to so many people express deep concerns for the country, I often hear, “we just need to get back to the Constitution.”  It’s said as if by simply making the statement some third party will magically solve our problems.  If that were the case I could play golf like Tiger Woods by simply saying “I need to get back to Tiger’s fundamentals” and expecting him to do it for me.  Ludicrous I know, but many American’s I talk with ask for that then contradict the constitution in their next response as they demand that Congress, in the name of expedience, act in a way that will in effect limit our individual freedoms and rights. At first I was un-aware of this contradiction, but as I heard the appeal to get back to America’s foundation, I determined to study the Constitution and America’s founding principles to see if I could really understand what people were asking for. I began reading books, taking college courses and attending seminars.  This led to giving seminars, inviting people to my home for discussion and lectures and becoming more personally involved in the political process, because what I found filled me with excitement and optimism.

When you discover something valuable you are compelled to share it and so I recently created a series of motivational messages about our nation’s inspiring heritage and sound fundamentals.  For months now I’ve received so much encouragement and applause for the content that I decided to write a book.  The message is so important that I couldn’t wait for its completion to begin sharing it with the world, so I created this blog and podcast.  The messages will give you a taste of how the principles of freedom (whether from American history or elsewhere) translate into your personal freedom and success by providing a fresh perspective on the powerful stories and events that shaped the freest and most prosperous nation the world has ever known.  Whether you are American or some other nationality I believe America’s foundation, though not perfect, provides a perfect launching point for understanding the principles of freedom for nations and individuals.  So here’s to enjoying freedom and success!

One thought on “Baking Soda, Vinegar and My Freedom”